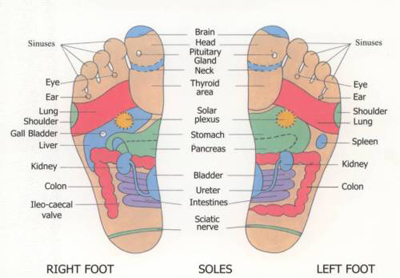 Reflexology dates back to ancient Egypt, Greece and China and was also used by Native Americans.

US doctor William H Fitzgerald pioneered it by developing a system of zone therapy in the early 1900s. He claimed that applying pressure to reflex points for each zone could influence the function of organs, glands, bones and muscles within that part of the body.

Eunice Ingham, a US physiotherapist, expanded his work in the 1930s. She developed a system using reflex points on the feet to treat all parts of the body. Her system has been widely adopted.

How does Reflexology  work?

It is based on the Chinese principle that certain areas on the soles of your feet or hands – known as reflex zones – containing millions of nerve endings, correspond to other parts of the body.

Around 3,000 years ago, Asian practitioners were massaging hands and feet applying pressure to certain points to stimulate organs, nerve endings and energy pathways to promote health.

Though it works on different principles to Western medicine, and there is little scientific evidence to back up its effectiveness, our clients say that their general health and wellbeing improves.

The Chinese believe that Reflexology stimulates the body into healing itself by improving circulation, reducing stress, pain and restoring natural balance.

A Reflexologist may massage your big toe and ankle to calm your endocrine and reproductive system, helping relieve PMS or menopausal symptoms.

A  Reflexology treatment involves direct pressure, small rotations and caterpillar-like movements on all parts of the foot and sometimes also the hands or ears.

Certain points are more tender than others. This is taken to indicate a build-up of crystalline deposits under the skin and imbalance in the corresponding organ or body part.

If you have an injury or lack energy, Reflexology can help to restore balance and help your body heal itself.

Reflexology can relieve the pain of multiple sclerosis (MS) and cancer treatments, but it should not replace conventional drugs like chemotherapy.

Our clients comment that being able to zone out for an hour enjoying a relaxing Reflexology treatment  has a positive psychological impact on their wellbeing, while pregnant women find that Reflexology relieves the pressure on their legs and feet.